If I had your endless attention, I could really go deep on the subject of any fabric. Since I don’t, I’m going to do my best to just keep you entertained and teach you a little history while we’re there. No NO!! Don’t run away! There’s no quiz or paper due, I promise!

So riddle me this. How are Jacquard/Damask Brocade and the modern day computer directly related? Wait, what? Yes, they are. And you’ll have to read on to learn how.

What makes Jacquard/Damask special? We have to go back to 18th Century France to learn that. We’ve talked about plain weave three times now. To review… 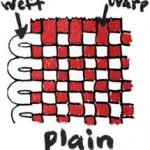 over-under-over-under. Got it? The weft thread is woven in and out just like we all did in girl scouts making those pot holders. To make patterns you inserted colors at different point. Stripes were the easiest. Jacquard is not a plain weave. Here’s the skinny:

First let’s jump back a few more centuries, say back to the 3rd Century A.D. Sassanid Empire. Remember I mentioned we’d briefly discuss Brocade. So after a loom was set up for weaving, a picture or pattern was set behind it and a secondary set of warp threads were added below and a shuttle was used to weave according to the picture. This gave the fabric the appearance of being embroidered. Usually of silk, garments were highly prized particularly by the upper gentry. Over time, the look had found its way to Europe about the same time we are introduced to M. Joseph Marie Jacquard.

A master weaver, Jacquard had a vision for the industry. Unfortunately, his vision met with resistance because eventually, just like present day automatic has, it would mean less workers to do the job.

In order to create a brocade fabric, one worker, called the “draw boy”, was needed at the top of the loom to select and manipulate the warp thread to bring it forward or behind the weft thread in the weaving process. To create a brocade, two weavers were needed.

Jacquard’s invention, a precursor to the early binary computer, replaced the draw boy by a punch card. Each punch corresponded to a specific thread. The punch card was on a spindle and as it turned, caused the warp threads to be brought out according to the sequence on the punch card. And like modern day automation, this meant the draw boy lost his job. Jacquard’s attachment allowed one master weaver to operate a loom by means of a treadle (Jacquard patented the treadle loom too.). It took time to catch on, but after the Paris Exposition, both the loom and the resulting cloth bore his name.

Jacquard is in simplistic terms, the name of the loom. We often interchange Damask and Jacquard because of this. Damask refers to patterned fabrics with a ground of one weave (usually plain, twill or sateen) and designs in other weaves (particularly satin and twill variants). The result is that the patterned areas have sheen and reflect light. Damasks are always reversible, with the pattern weaves becoming the ground weaves on the reverse (so on a fabric with a plain ground and satin pattern front, the ground would be satin and the pattern plain on the reverse).  There are tone-on-tone damasks, with different weaves within the damask creating elaborate floral or geometric patterns, and multi-colored damasks, where the background colors and the pattern colors reverse from front to back.

Brocades, also a type of Damask, are created on the same loom but always use two different kind of threads, say a velvet and a silk thread of basically the same color. These differing threads create vibrant images that appear to be raised or embossed. Imperial Brocade for example uses gold or silver threads to create costly fabrics with threads in the design of precious metal.

When you want a costly look, choosing a Brocaded Damask or plain (like damask is ever just “plain”) Jacquard/Damask, the effect is spectacular. You’ll enjoy centuries old technique with modern styles as well. Remember these are heavier weight fabrics that will create heavy  drapes and sturdy upholstered items. You’ll likely need to match patterns so always buy at least 25% more to account for that, more if it’s a very large image with a big repeat.

Check out some of the new selections available now. Some are limited editions so get ’em while they’re hot. Some of my favorites are listed below. You can also search by fabric type by simply selecting Jacquard or Damask under Fabric Type in the drop down box under “Fabric“. 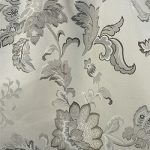 Camelia Silver (a Jacquard but in the brocaded style)

Remember, knowing that natural qualities of fabric helps you make informed decisions to ultimately save time, money, and heartache.